While food insecurity is rapidly rising, the world is expected to waste 2.1 tons of food a year by 2030, according to Yale research. In the United States alone, $408 billion was spent on food in 2021 that was never eaten. That’s nearly a quarter of U.S. food going to waste instead of to those who need it. 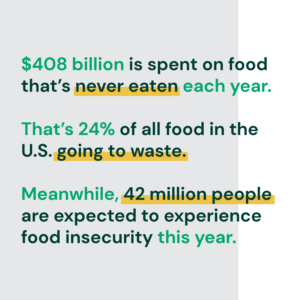 Today, on Stop Food Waste Day, Grubhub is doubling down on its calls for Congress to pass the Food Donation Improvement Act (FDIA), which would strengthen existing laws for food donations, help prevent food waste, and provide relief directly to the millions of Americans who are experiencing food insecurity.

Alongside WW and other partners, Grubhub has been a leading backer of the Food Donation Improvement Act. Our vice president of government affairs, Amy Healy, recently joined Food Tank’s “Food Talk” podcast to discuss the role of the private sector in combating food insecurity – and why the government needs to make it easier for companies to donate food.

As Amy explains, the Food Donation Improvement Act is an essential step toward bringing all businesses – not only large corporations, but also independent businesses, such as Grubhub’s restaurant partners – into the fight against food insecurity.

The Food Donation Improvement Act would build upon the Bill Emerson Good Samaritan Food Donation Act, which passed in 1996 to encourage companies to donate their surplus food and grocery products to nonprofits by providing civil and criminal liability protection to food donors and food recovery organizations. However, many food manufacturers, retailers, farmers, and restaurants still cite fear of liability. Expanding and clarifying existing liability protections for food donation is crucial to ensuring that companies can donate safe, quality foods, without a preventable concern about litigation.

Grubhub continues to meet with offices on both sides of the aisle to generate support for this legislation and to solicit additional cosponsors, with the hopes of the bill being included in upcoming relevant legislative packages.

We are also doing as much as we can right now to fight food insecurity and reduce waste, in hopes of inspiring our partners and competitors to do the same. Grubhub has donated millions to organizations like Rescuing Leftover Cuisine, a food rescue non-profit headquartered in New York City that is purchasing meals from minority and women-owned restaurants that are donated back into the community to food insecure families. We’ve also given to the MEANS Database, which with Grubhub’s domination is purchasing leftover food from restaurants in Chicago, Denver, Los Angeles, Las Vegas, Oakland, Philadelphia, Providence and San Francisco and donating it to underserved communities in need. And

Grubhub Community Fund Donations to these and other related organizations – including via our diners through our Donate the Change program – totaled more than $2 million in 2021, and we’ve recommitted to those partnerships for the year ahead.

It’s time for America to modernize its food donation laws so we can reduce waste while getting food into the hands of those in need.